The introduction of extracorporeal shock wave lithotripsy (ESWL) in the early 1980s revolutionized the treatment of patients with kidney stone disease. Patients who once required major surgery to remove their stones could be treated with ESWL, and not even require an incision. As such, ESWL is the only non-invasive treatment for kidney stones, meaning no incision or internal telescopic device is required.

ESWL involves the administration of a series of shock waves to the targeted stone. The shock waves, which are generated by a machine called a lithotripter, are focused by x-ray onto the kidney stone. The shock waves travel into the body, through skin and tissue, reaching the stone where they break it into small fragments. For several weeks following treatment, those small fragments are passed out of the body in the urine.

In the three-plus decades since ESWL was first performed in the world, ESWL is a safe method to treat stones when proper indications are followed. 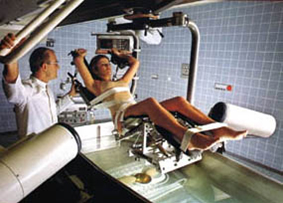 The first generation (G1) ESWL uses positive and negative electrode rod to discharge in water to have spark and generate shock wave. The shock wave is then deflected by oval shape steel bowl to focus at a fixed focal point, and when the focal point is focused on the kidney stone; the focused shockwave applies energy on the stone and break it. After thousands times of hitting, the stone will be pulverized. This is called Electrohydraulic Shock Wave Generator. 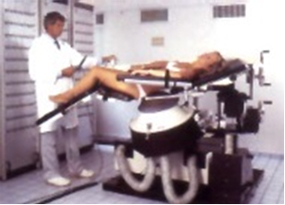 The second generation (G2) ESWL is of dry treatment. Patient does not need to immerse in water tank, but with water cushion fit to skin and the water blade transmit the focused shockwave into body and penetrates through skin to attain the purpose of breaking stone. In this manner, the inconvenience of pre-treatment preparation is reduced greatly, and ESWL techniques become widely applied on treatment of urine duct calculus. Unfortunately, the result of treatment (Stone Clearing Rate) is no better than G1 ESWL. In order to reduce the X-ray radiation dosage, G2 ESWL offers also ultrasound localization model, an option to X-ray localization. G2 machines are placed inside surgery room mostly and patient needs general anesthesia or local anesthesia.

The third generation (G3) ESWL kept the advantage of G2 dry type treatment and improvement is mainly shock wave and convenience of localization for increasing treatment effect. There are many different type of shock wage generation manner, such as Electromagnetic, Piezoelectric and Electroconductive. Efforts are concentrating on stability of shock wave and the pains felt by patient during the process of treatment. In addition, localization manner is in X-ray and Ultrasound Dual Localization. The mechanism design helps stone localization faster. Treatment with G3 ESWL, patient needs no anesthesia but pain killer only. The treatment time is also reduced greatly; it can be done in OPD. Academic reports indicated that the treatment effect is much better than G2 ESWL.

In order to provide patients with safer and more comfortable treatment, Lite-Med has developed the following new system to its 4th Generation Extracorporeal Shock Wave Lithotripter:

In 3 steps, the stone location can be completed –  X-Ray is beamed one at 0 degree and one at 30 degree and when the spatial position is obtained, press location key; the accurate servo control bed will move patient lying on top to move stone to the focal zone of shockwave. (During the process, the patient will only be beamed with dosage of 2 X-ray snap shots. With two key clicking, the monitoring is completed. After completing stone location, Robotic arm will place the Ultrasonic probe to touch patient and the center point of the probe is the stone location point. Ultrasonic Image will monitor the stone under treatment on Real-Time basis, and safe treatment is then achieved as a piece of cake. Should the patient is with radiolucent uric stone, use automatic ultrasonic can be used to complete stone location directly

Kidney stone may shift in the treatment process due to patients respiration and this could cause inaccurate hitting of shockwave, as reported in certain research journals, the hitting rate is only 45%. With Automatic Dual Location System, the Ultrasonic Monitored Image and accurate and fast treatment bed movement control plus missile tracking target principle, the system is placing stone under tracking in the stone fragmentation process, thus, the shockwave hitting rate is increased. The present hitting rate of this system is picked up to as high as 90%. Clinical reports indicate, after treating 1332 kidney stone with this ultrasonic stone tracing system, the effect of treatment is no worse than any other foreign built equipment, and what is more is there is no kidney hemorrhage reported. Even better is that the shockwave hitting time is reduced to less than 40%. The facts above indicate this is safe and effective extracorporeal lithotripsy treatment.

Different from Tracking System, this system utilize the stone monitoring Ultrasound Image and the shockwave will be triggered only if the stone is moved to the effective shockwave focal zone. In this application, the stone hitting rate is increased to close to 100%, that the shockwave will be totally and effectively hitting on the portion to be treated and the misfiring will be eliminated and keep the side effect from generating. This brings safe and effective extracorporeal shockwave lithotripter treatment.